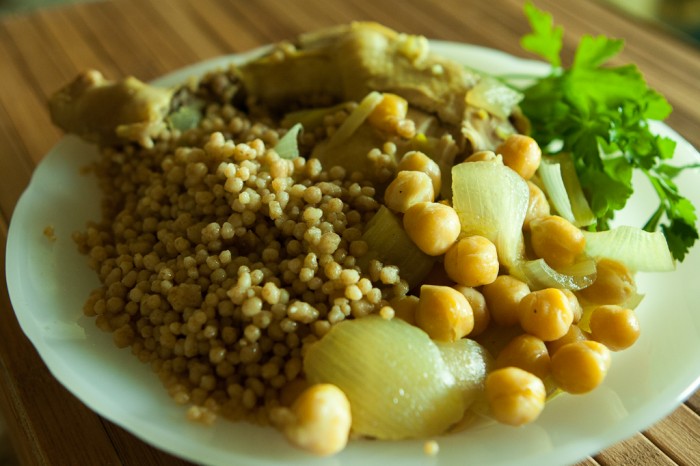 Maftoul or Palestinian couscous is a traditional staple food in Palestine, typically made and served in occasions and holidays. Couscous is originated in Morocco and brought by Moroccan migrants to Palestine where it has been modified to what’s called maftoul.  Although maftoul is considered as a special type of couscous but its made from different ingredients and it also has a different shape.

Maftoul is an Arabic word derived from the root “fa-ta-la” which means to roll or to twist, which is exactly describing the used method to make maftoul by hand rolling bulgur  with wheat flour. Palestinian high quality handmade maftoul products are available widely online with good prices comparing to the effort and time needed for making them.

I’ve never made maftoul from scratch before preparing this post, nor watched someone making it. It’s more common nowadays to buy ready-made maftoul from stores. However, I thought it’s very important to know and learn how it’s done the old way like Palestinian grandmothers used to do it. And here I’m sharing the process with you along with directions and photos… Many thanks go to my 70 years old aunt, Itaf, who volunteered to teach me making maftoul from scratch knowing that the last time she made it was more than ten years ago.

Ingredients of maftoul are: 1 ½ cups bulgur, 2 cups white flour, 4 cups wheat flour, and 2 teaspoon salt. Before starting the process of making maftoul, she added 3 cups of boiling water to the soft bulgur and left it to be soaked for about 10 minutes. Meanwhile she mixed white flour with wheat flour and salt, and placed a large empty tray on the table where the process of making maftoul took place.

She started by adding a pinch of soaked bulgur to the tray, a pinch of mixed flour, and then she mixed them together by moving her fingers in a twisting motion until bulgur small pieces got  coated by flour (the more you add flour, the bigger size of maftoul you get). She kept adding pinch of bulgur, pinch of flour and water in some cases (when flour is not sticking to bulgur pieces) while mixing them continuously using her most fingers. She put the perfectly shaped pieces of maftoul in an olive-oil greased colander (heat-proof one). She continued to do this process until flour is finished. 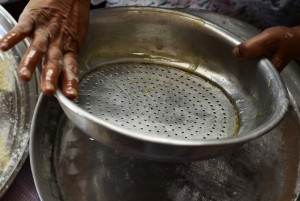 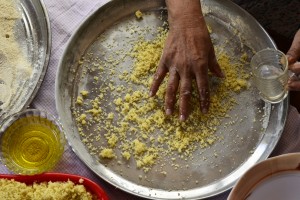 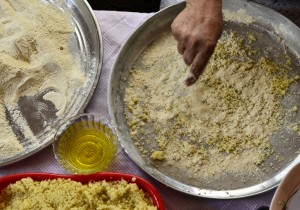 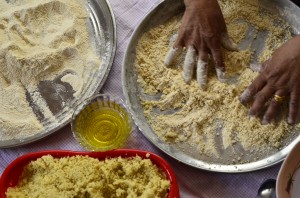 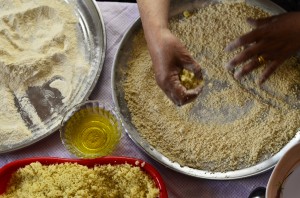 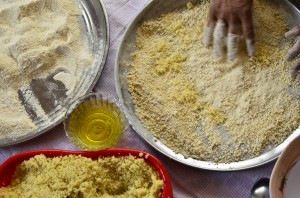 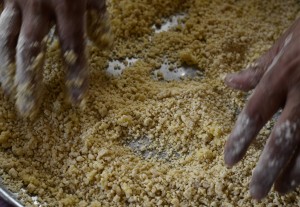 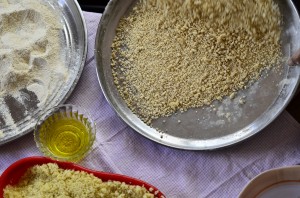 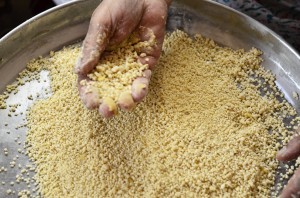 After that she placed the colander (that’s full of maftoul ) over a boiling water pot for 5 to 10 minutes. Then she sealed pot edges by dough to prevent steam escaping, it was very interesting to learn this creative technique. Maftoul partially cooking is an important and necessary step in order to keep it in good condition for several days before using it. Another way of keeping maftoul for several months is to dry it by lying it on a warm and shaded surface. 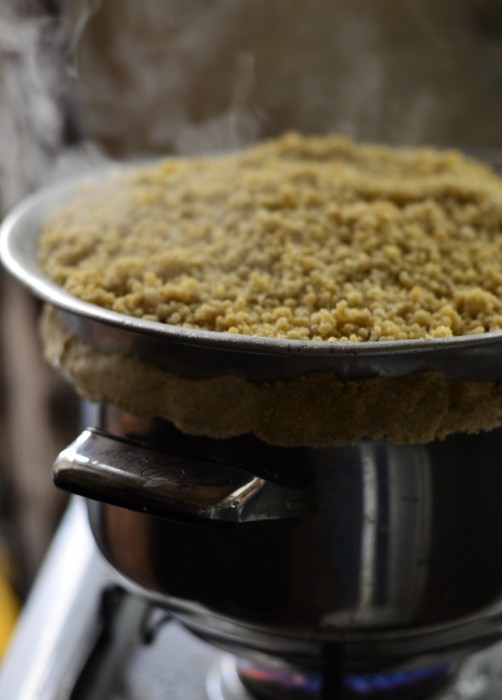 For the Stew: In a large pot, sauté chicken with olive oil for 5 minutes on a medium heat. Add cumin, salt, turmeric, and allspices. Cover chicken completely with water and leave it until it’s partially cooked for about half an hour. Add onions and chickpeas to the partially cooked chicken and leave it for another20 to 30 minutes until it’s all cooked. 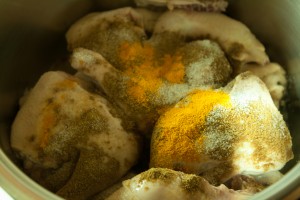 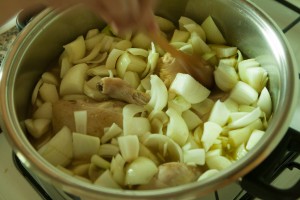 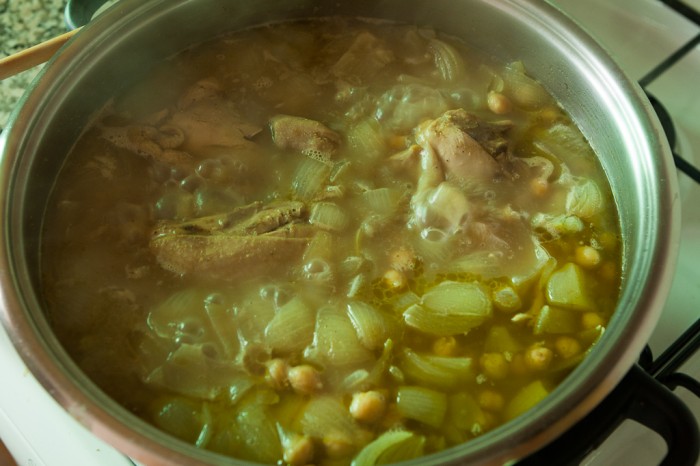 For Maftoul: cooking process can be done using one of two methods, both of them require a steamer or a heat-proof colander pot (which is a special kind of pot comes with holes, placed over a normal pot) where maftoul will be cooked by the steam not direct heat. Two methods are: 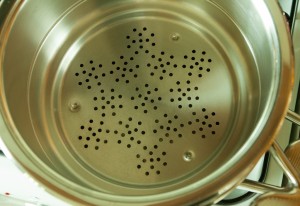 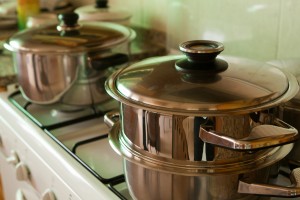 After placing maftoul in the colander, make a small hole in the maftoul, add finely chopped onion, cumin, salt. Then close the hole (as if you’re burying onion and spices inside maftoul). Cover the colander by a lid and leave it to be cooked by the raising steam for about 15 minutes until a lot of steam is rising from maftoul colander. 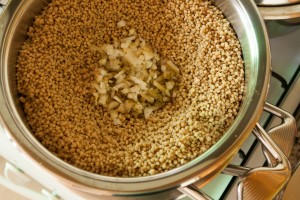 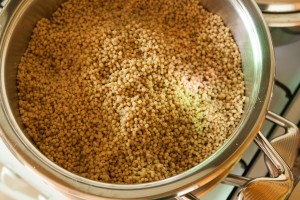 Pour maftoul in a serving plate/pot, add add olive oil and 1 cup of chicken stew to them and stir until well mixed. Pour chicken stew in a different serving bowl and serve hot. 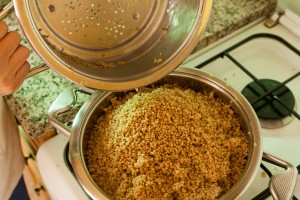 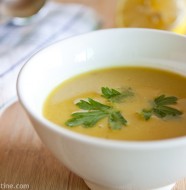